Apple seems to always come up with different ways to make installing or using iTunes in Windows harder every time. In the most recent version (12.1.1.4) Apple released 64-bit variants of Mobile Device Support and Application Support to make it a true 64-bit application with all their components.

That’s the good news. The bad news is that, for some reason, the 64-bit variant of Mobile Device Support fails to install in some Windows computers. The most common error is seen during the installation of iTunes.

The official support forums have many users facing this problem. 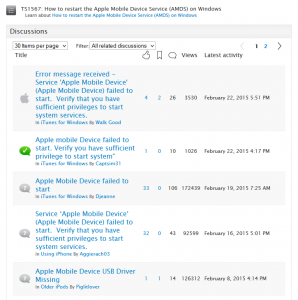 Instead of coming up with a solution to fix this problem, Apple released an alternative version of iTunes for 64-bit systems that does not have the 64-bit component of Application Support. They are calling it a 64-bit version for “Old Video Cards”. Whatever that means.

They made some changes in iTunes.msi  and AppleApplicationSupport.msi but I didn’t look deeper into them because, to be honest, I don’t use it and I just maintain these installers for clients or users that visit my site.

I’m making another custom installer using this specific version to those of you that can’t install the regular installer. I hope they get their act together and fix this problem so when a new version is released we get only the two regular installers instead of three, with a new version of this “Old Video Cards” variant.

Use my regular custom installer as you would normally do. If you can’t install it because of the AMDS problem listed above, use the alternate installer. You can read this support article in case you are able install iTunes normally but the Apple Mobile Device service is not starting.

Apple released iTunes 12.3.1.23 today. The changelog is comprised of fixed security vulnerabilities as mentioned in the release notes. The original installers can be downloaded...